We are all very excited to be working with Yifei on #Mulan. She is an amazingly talent young woman and I can't wait to see her make this role her own! 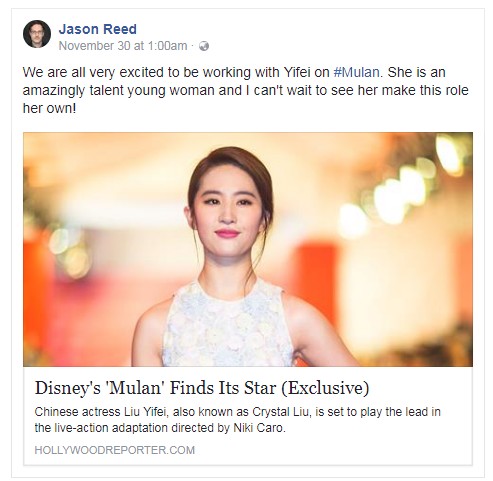 Ever since we found out that there will be a live-action Mulan coming our way, we have been so excited to hear more details. Today is a great day, because we just found out who will be portraying Mulan: Chinese actress Liu Yifei, also known as Crystal Liu. Amazing!

Other details we know: The live-action film will be inspired by both the legendary ballad and the Disney animated classic. The film is being directed by Niki Caro, and produced by Jason Reed, Chris Bender, and Jake Weiner. Bill Kong will be executive producing.

Ming-Na Wen, who was the speaking voice of Mulan in the animated classic, had this to say: